All photos are free to use.
Posted by Gallery-SAKURA at 5:57 AM No comments:

We have uploaded a movie of Chouyou Ouka Fuji, Nakajima Chinami.

Posted by Gallery-SAKURA at 3:15 AM No comments:

Kataoka Tamako, the great master of Japanese painting awarded the Order of Culture, passed away last Wednesday. She was 103.

She began by painting figures, mostly people who were close to her. In the 1950s, she became engaged with traditional motifs and developed a bold and exuberant style. Around the same time, she discovered the vital appeal of landscape, which had previously been regarded as the background of her figure paintings. She often takes her most beloved mountain, Mt. Fuji, above all as her subject.

She was one of the artist whom I like the best. Although she was not in good physical condition when I met her lastly, the news has shaken me to the core. I pray for the soul of her and her family.
Posted by Gallery-SAKURA at 1:32 AM No comments:

Present a book of Japanese paintings

Gallery-SAKURA presents a book of Japanese paintings every month under a lottery system.

We have books of various artists handy every month.

Please fill out the questionnaire form if you are interested. 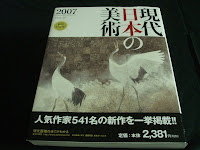 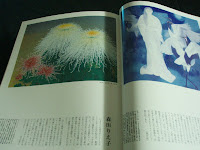 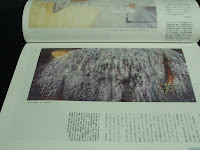 We are very happy to greet you this new year.

Gallery-SAKURA was able to grow up by the support of many people last year. We deeply appreciate all of you.

We would like to continue improving our service and providing the artworks that satisfy our customers.

Scrolled paintings (Kakejiku) are in stock

We have stocked with some scrolled paintings (Kakejiku) and other artwork.


Kakejiku is a painting, calligraphy, etc., mounted on paper or cloth as a scroll for hanging on a wall, etc.

It has the axis made from wood or other materials, and paintings or calligraphic pieces are rolled up around it.
It is indispensable for cha-shitsu, a room constructed for tea ceremony, and the unique charm which is different from that of a framed painting comes from somewhere deep within.
Posted by Gallery-SAKURA at 3:45 PM No comments:

The beauty of pigments is one of the appeal of Japanese painting.
Do you know the materials of pigments? There are some strange materials.

*Gunjo
A blue pigment made from azurite, a mineral which is found in copper ore deposits. It is expensive because it is produced in small quantities.

*Lapis lazuli
A blue pigment made from lazurite. It is often called Ultramarine.

*Rokusho
A green pigment made from malachite. It was used for mural paintings in the stone caves in China from around the 8th century.

*Shu
A red pigment. It is prepared from the reaction of mercury with sulfur.

*Gohun
A white pigment made from powdered oyster shells. It is also used for softening other colors by blending.
Posted by Gallery-SAKURA at 1:20 AM No comments: